After passing the ROUTE exam on Tuesday and dealing with other things the rest of the week, I decided to relax today and start putting together the Warhammer 40K Drop Pod I bought while I was in Melbourne earlier in the year. I have posted about my nascent painting skills before when I did a Dreadnought and some Space Marines.

This time, I thought I would document the various stages. I just got to starting the painting when the light started to go. For some reason, I prefer painting with natural light around. I have a good halogen lamp, but it isn't the same; I have trouble looking at the fine detail.

So first, I needed to get all the pieces from the plastic frames. 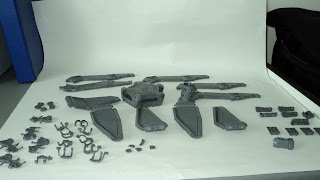 Next, was gluing together the engine parts, central pillar and harnesses. I really don't like the gluing part. The glue fumes are not very pleasant, so I wear a mask, which is a bit uncomfortable in itself. 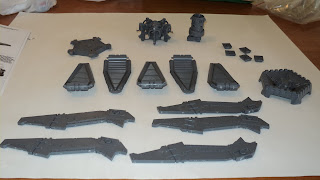 Next, I applied a black undercoat. I am going for the Ultramarine blue, so I use black instead of white. I use a spray can and apply it fairly quickly. The wind was blowing pretty well this afternoon, so even with my painting shroud (that is a cardboard box) it was a bit uncomfortable. While the undercoat was drying, I began painting the central pillar. Once the undercoat was dry, I began doing some initial assembly. Based on previous experience, I am going to do the fiddly bits of the harnesses before gluing them into the main piece. Below, the doors, body, two wings and engine assembly have been put together. The middle pillar is not glued in yet. 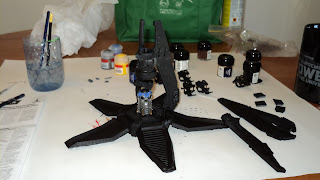 Below I show some detail on the central pillar. It is first coat, so is a little rough. Boltgun metal, highlights in copper and gold, with red for lights and some black for screens and white for the keypad. 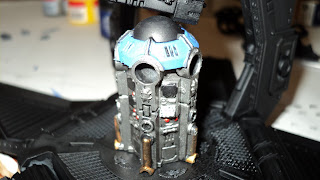 Finally, I began painting the main parts of the structure. First coat of Ultramarine blue. 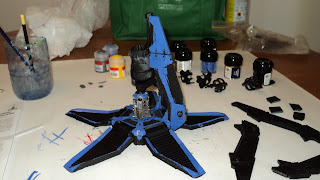 At this point, the light started to go, so I called it a day, and put it away in the laundry so the glue smell didn't pervade the house and went to the gym. I will probably do a little more on it tomorrow. Stay tuned to see how it turns out. I'm still a bit undecided if I'm going to make it look pristine or a bit weathered. I'll see how it turns out.
Posted by Matthew at 7:52 PM
Email ThisBlogThis!Share to TwitterShare to FacebookShare to Pinterest
Labels: painting, warhammer