So today I spent cutting up the old carpet to put in the bin for tomorrow and doing laundry. Then I started doing some more painting on the Drop Pod. First I started by working on the wings and boltgun metal parts of the pod doors and the central floor. 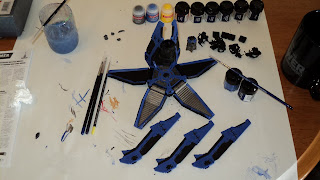 The imperial eagles on the floor were quite tricky. I tried to keep the metal colour on the floor so that it would look like a grating (click on the images for larger views). 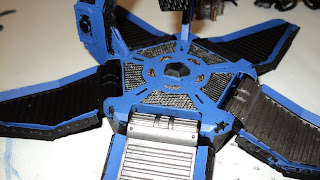 Next, I finished the wings and metal door parts. Then I did the engine and missile launcher. I did the top of the engine and its blades in silver to make a niche highlight. Next I did the harnesses in boltgun metal with some red highlights (they are a bit out of focus on the image). 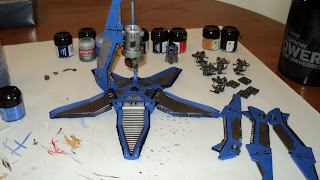 Below is a closeup of the missile launcher. The skull and eagle wing in gold, black to indicate exhaust scarring and red missile tips. The red will need another coat to bring up a bright red colour. 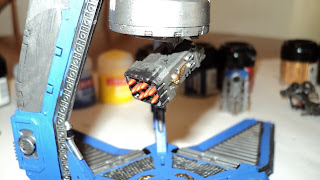 Once again, the light began to go, so I called it a day. So far, I spent around six hours yesterday and five hours today. Tomorrow, I will look at doing the door edges, outsides of the door and underside. Then second coats on a couple places, then I should be ready for final assembly.
Posted by Matthew at 8:19 PM
Email ThisBlogThis!Share to TwitterShare to FacebookShare to Pinterest
Labels: painting, warhammer