It is finished! Over the past few days I've been concentrating on other things, like doing some study for the CCNP SWITCH exam, and recovering after my personal trainer tried his best to make me throw up on Friday. Anyhow, today I did the final assembly and painted some boltgun metal on the doors to indicate some weathering. I ended up not painting the underside of the pod, as it will not be visible anyway. I could at a later point do some more damage or wear painting, but for now I am satisfied how it turned out.

I am no better a photographer than I am a painter, but here are some pictures. First, the final assembled unit. You can see the harnesses and missile launcher, engine assembly and wings. In the background for scale is a Space Marine and a Dreadnought I had previously painted. 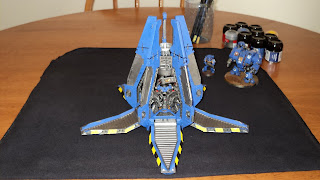 Next, a shot with the doors closed. The Imperial Eagle indicates the Sergeant's position, the other doors have the Ultramarine insignia in them. The bottom of the pod underneath the doors is a prime place for doing some heat damage or scarring from re-entry, but it is pristine blue for now. 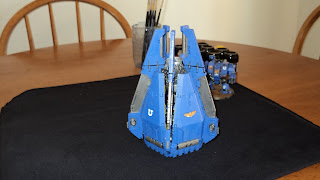 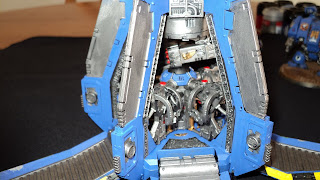 So there you have it. In all, I think I spent around twenty hours on the assembly and painting. If I had a steadier hand, I probably could have spent more time perfecting some of the detail. It is not going to win any prizes, but I am happy with it. Any suggestions on what vehicle or character I should do next? Well, maybe after I've finished my CCNP stuff, I will head down to the local Games Workshop outlet and have a browse.
Posted by Matthew at 11:25 AM
Email ThisBlogThis!Share to TwitterShare to FacebookShare to Pinterest
Labels: painting, warhammer