It was not my intention to use this blog primarily to highlight my supremely mediocre Warhammer 40K painting skills, but it seems it has turned out that way lately.  Anyhow, this morning, I went to the nearby hardware store to pick up some new blades for the Stanley knife and a new fine file, the previous one having disappeared into the dimension of missing tools, socks and coins.

I opened up the Terminator Squad kit my brother bought me for my birthday while I was visiting them a few weeks back (never mind that my birthday is not until late August).  A couple of hours work then ensued as I cut the pieces, trimmed the excess plastic and filed down the rough cuts.  The result - five dismembered Space Marine Terminators.  Unlike the plastic Tactical Squad, the weapons are integrated into the arm pieces, and the heads and torsos have a smaller range of movement so a few less posing options present themselves. 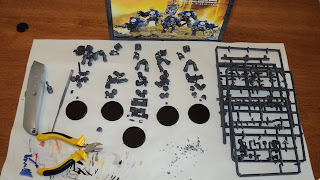 Then I had some lunch, and repaired to the patio outside.  I really dislike the smell of the glue, so I like to do that part outside, and even then I prefer to wear a mask to keep out the fumes.  Probably overkill, but it is what I do.  There were a few different weapons choices.  I selected a power sword and storm bolter for the sergeant (in the centre of the picture). Next, I did my tax return while a waited for the glue to dry.  After a couple hours doing that, I proceeded outside to do the undercoat.  As these will be in the Ultramarine colour scheme (yes, boring, I know) to match my previous work, I did the undercoat in Chaos Black. 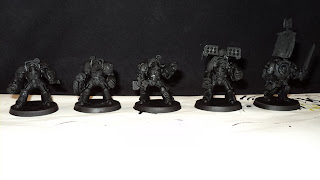 As it is now approaching 3:30 pm, the natural light is starting to go, and so I won't start painting them this afternoon.  Rather, it is about time for me to head to the gym for the daily workout.  I'll keep you posted on progress.  I will probably spend a few hours painting tomorrow while I mull over my next certification move.

Posted by Matthew at 3:39 PM
Email ThisBlogThis!Share to TwitterShare to FacebookShare to Pinterest
Labels: painting, warhammer