Today I painted the second of the Devastator Squad.  This Marine has a multi-melta.  I took a slightly different approach with this one.  I used a fine detail brush exclusively, even for the blue areas, and attempted some finer control  I tried to get just the one coat of blue in most places, so that later touch-ups weren't a fourth or fifth layer. 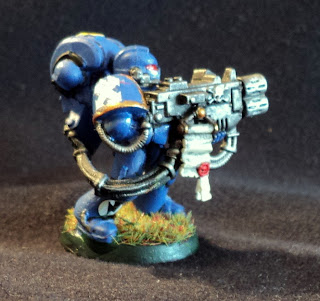 I also tried some new things. The weapon was left black, and I drybrushed the Boltgun Metal over the top.  I then used Mithril Silver on the weapon end and the skull detail.  The black hoses to the backpack, I drybrushed the Boltgun metal on edges to give the hoses some highlight detail.  The scroll on the front of the weapon was layered.  I used Scorched Brown, then Bleached Bone, followed by white to give it a textured look with highlights.  I used Shining Gold on the hanging piece, and brown for the ropes. 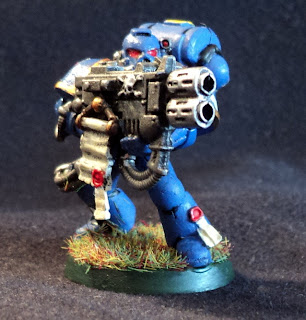 All in all, I a pretty happy with the way this turned out.  A am going to try some shading and blending on the power armour in the next couple of Marines.  That will need a trip to the store, though.  I'm going to try to do a bit of painting now and then, but tomorrow (Monday) I am going to start into my CCIE study for the written exam.  I'm going to see how long a chapter of the guide takes, and then do up a schedule so I can get to the written exam in the next few weeks.  So painting will be for relaxation and breaks, or when the study gets a bit much. 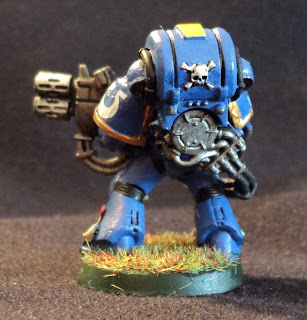 Posted by Matthew at 3:15 PM
Email ThisBlogThis!Share to TwitterShare to FacebookShare to Pinterest
Labels: painting, warhammer