With today being my 39th birthday, I took a bit of a break from the study.  I had a session with the personal trainer, and I seem to have done something to my right wrist. Luckily, I'm left-handed, which meant that I could do a bit of painting.  I thought I might try something a little challenging, so I began work on a Librarian.

This is my first metal miniature, and it came in three pieces.  I undercoated them separately the other day, blocking out the joins with masking tape so I could work on the detail unimpeded.  I spent two and a half hours painting the left arm carrying a book. 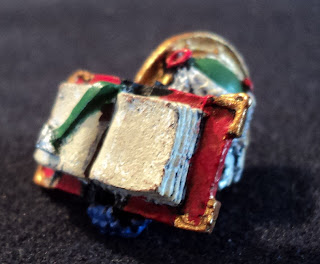 I began with the gold parts on the book and shoulder.  Next, I did the green of the bookmark and silver on the pendant.  Next, the white on the pages, which was then drybrushed with Bleached Bone and brown to give an aged look.  Some brown in the centre of the book adds some depth.  After the pages, I did the red "leather" of the book.  I tried to make the red a bit "rough" to give a bit of texture.  I'm not sure yet if I am going to attempt a bit of freehand work to at text to the page. 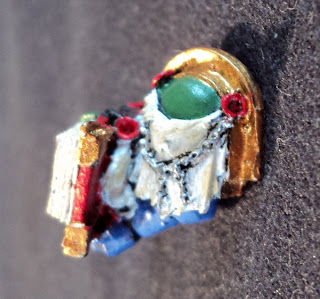 I then did the white of the banner on the shoulder.  This was overlaid with some Bleached Bone to give some texture, but it doesn't show up too well in the photo.  Then red on the purity seals and silver on the chain.  I chose green as the shoulder colour, although technically it should be blue for an Ultramarine, but I thought the colour stands out.  (This photo and the next were taken, then rotated, which is why the light seems to be coming from a funny place) 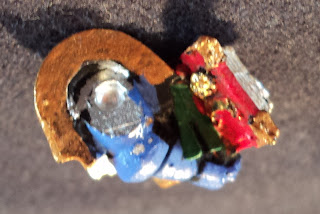 Lastly I did the arm.  The silver part is the un-coated area to attach to the main piece.  Note that the fine detail on the back of the book will be practically invisible once it is attached.

This was painstaking and careful work.  I have a feeling this librarian will be a fairly lengthy project to do in between study. 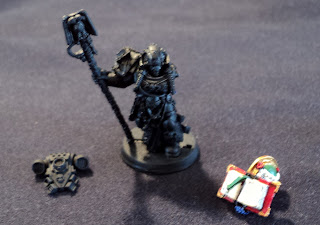 An idea of scale.

Posted by Matthew at 4:15 PM
Email ThisBlogThis!Share to TwitterShare to FacebookShare to Pinterest
Labels: painting, warhammer